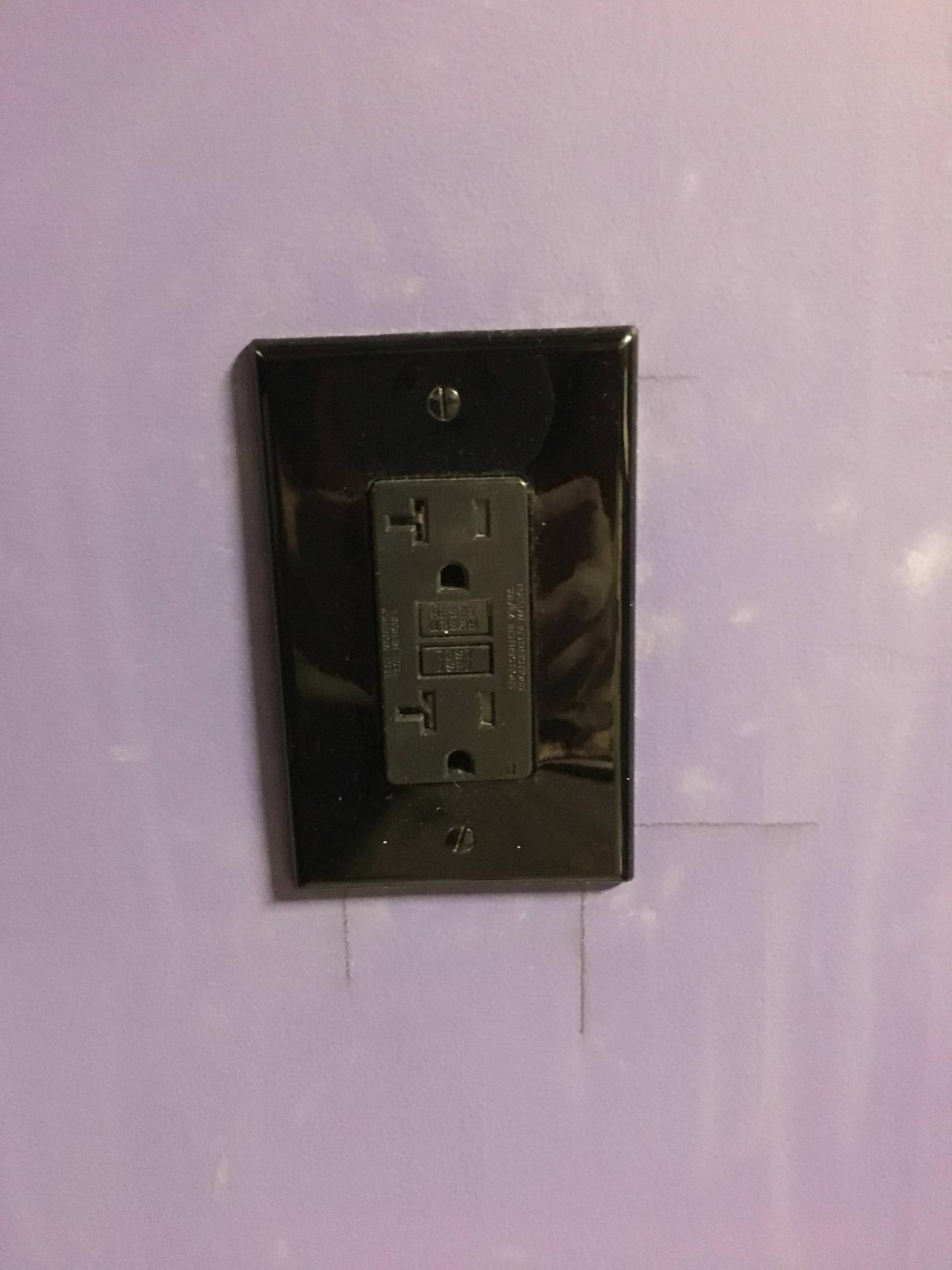 Look at that innocent seeming outlet. Sure the wall is a bit dirty, but... it's just an outlet, right? I went through quite a process to make that happen.

I've once again challenged my dearest mother to a blog-a-day thing, just in time for the site rewrite. Maybe that was the point.

Since I've been in California and become a high-functioning alcoholic by nature of being employed in Silicon Valley, I've made attempts to try and go booze free for an entire month. I successfully pulled this off in 2013 and 2014, skipped 2015 because booze was required to make it through Voyager, and promptly forgot about the whole thing by 2016. I almost pulled it off again in 2017 when I had a wisdom tooth removed, but it turned out that the doctor's ban wasn't as extreme as I'd initially been lead to believe, so the month turned out to be more like a week.

Fast forward to today wherein I've just completed another full month of sobriety. At a time where I'm going through therapy and putting myself and my actions through more scrutiny than usual, it's been interesting to "watch" how I've coped with the lack of ethanol coursing through my body.

Recognizing that I was having more nights per week tipsy than not, I decided to give the Month of Sober test another whirl. I really had two reasons:

Knowing that most of my alcohol consumption is social in nature, I let my friends know what I was about to embark on and - perhaps a little too harshly - requested that the peer pressuring and good natured ribbing be kept to a minimum. I wasn't entirely sure where my resolve was going to fall this time around, so I tried to stack the deck both in and against my favor.

I finished my last drink at ~12:30am on February 1st, the remains of a drink I'd already been working on. As I trudged through those first few days, I had some legitimate cravings for beer (only ever beer), basically always when I was in some social situation where I'd generally be drinking (off-site lunches with co-workers). Additionally, I noticed myself being a little crankier than usual, but also having more drive than usual. Turns out when you're not working off a mild hangover in the evening from lunch drinking, you feel like you can do a whole lot in the evening. Not a single day went by during that first week where I didn't think about booze, but I made it through. Interestingly enough, when I was at home (so long as I wasn't playing video games with friends/family), I had absolutely no cravings for alcohol at all.

The second week had the first quasi-intentionally planned hurdle: a long weekend with friends up in Tahoe. Normally, while everybody else is skiing, I'm doing my own thing in the cabin and nursing a beer, the idea being to keep some sort of buzz going all day. When friends are around, things ramp up a bit. So, given that my MO for being on a snowy mountain is to drink and relax, this was particularly challenging. There were several times where my mind would subconciously be "you can have a sip", but I caught myself before I ruined a good streak. In the end, I settled for a few "chocolate" covered coffee beans to help me mellow out a little. I still had a good time and managed to not touch the boozes.

By the time I got into week 3, the sadness of not being able to drink with friends had subsided a bit. I had two more challenges lined up for this week: a nice game of golf (another excuse to drink and just have fun) and going to see the Book of Mormon. Being that I don't golf too seriously, not being tipsy took a lot of the fun I associated with the sport away, but driving the golf cart and watching my friend drink for me was still enjoyable. The only real "issue" with Book of Mormon was when we went and pre-gamed before the show. I wasn't really sure what to drink, so I asked for a virgin gin and tonic. The waitress gave me a funny look and said "...how about a virgin mojito instead?". Turns out her suggestion was a sound one, though it was basically soda and I really don't do soda anymore. By this time, my evening work has definitely seen an uptick, with me using that energy to rewrite this website, get some work done, make a video, whatever. I did enjoy that aspect.

Week four saw me settled into this role of non-drinking. The psychological cravings were still there, but not as bad as before, and I was beginning to get excited for entering back into that realm, but I had a worry: how do I approach my re-entry into the world of drinking? By this point, I'd basically proven to myself that I could actually quit any time I wanted to, but I didn't want to. Drinking is a fun activity to accompany doing things with friends and family and it definitely helps me loosen up and get over inhibitions (social lubrication is a very apt name). By the same token, I was enjoying some aspects of not drinking. Moderation is the word that comes to mind, but me being me, I need a plan for it. I still don't have a plan...

So, today, having successfully passed my personal test, my friends and I had a little lunch celebration and I imbibed again. It was a little weird at first, as I held the beer in my hand, but it was very rewarding to sip on that Lagunitas Fudge and Sickle Stout. In the toast, I did thank my friends for being mostly supportive, because that definitely does help.

What Did I Learn?

There are a few key take aways from this little journey:

I still haven't quite decided how I want to balance all of this. During my abstinence, I had a lot of really interesting discussions with my friends. As I alluded to above, my internal mindset was counting days without drinking within a week, but one person suggested looking at in terms of number of drinks in a given time period. I think that'd be a good way for me to implement some kind of control in a manner my brain can wrap its mind around. Say... seven drinks per week. That could be one beer a day or seven GnTs in one sitting, but nothing the remainder of the week. That might be a good place to start.

I'm really glad that I did this again and am proud that I made it through. There was much to be learned about myself along the way, and I hope it's another stepping stone to a healthier mindset.

But, Jesus. If this is how I analyze one month of sobriety, the aftermath of losing my virginity is going to melt my poor brain...

Hmmm... the dust is thick... about one year thick. How did that happen?

2017 was not a great year. I'm sure many others would say the same for various purposes and reasons, but mine are my own. I'd argue that it was probably one of my most depressed years on record. Nothing seemed to click, outside of drinking and wallowing in similar misery with friends. There's some hyperbole in there; there were some reasonable moments of 2017, but it had the lowest lows, I think.

But we're not here to talk about depression. That's a post (or more) all its own.

Can you believe it's been six years since I last redesigned this blog? Indeed, for a sequence of time, redesigns were nearly annual. I've no doubt that part of the cool off was simply my entrance into web developent as a profession. I've exactly one redesign since beginning my employ at the end 2009. No doubt running RedditBooru and AnimeBracket on the side has contributed to the slacking as well. Who wants to rewrite a blog when you've got two successful websites that demand attention?

This redesign comes at a time where minimalism is at the forefront of design. Gone are the days of small text, gaudy colors, and rounded corners. In is simple to read typography and spatially considerate layouts. Makes it easier to style a website, for sure. But, I also went waaaaaaay back to basics on the site engine itself. Instead of the behemoth do-everything-and-framwork-for-the-rest CMS, this site is static. You (probably) won't find comments. You won't find metrics driven "popular content". There is simply... my content. Arguably, some niceties have yet to be added, such as comic navigation, date sorted archives, and maybe tags (I'm on the fence with those; the data is technically there), but I'm okay with the simplicity that is the site right now.

Now, I've not gone back to the days of hand authoring HTML files. I'm better than that. This iteration of dxprog.com is powered by a static site generator that I wrote, because I've not made one of those. The content is all markdown files and the layout is put together with React components. Initially, it was going to be a bunch of handlebars templates, but the notion of using nothing but a bunch of shareable React components to statically stitch a page together intrigued me. Seems to have worked, because here we are. My intention for the site generator itself was to be both standalone and also extensible via an npm package. This site is built the latter way and has its own home on GitHub as well. But, enough technical shit.

When will the next redesign be? Who knows. Six years from now, I'll be pushing forty.

Trackpad'd this up in the airport waiting for my brother. Heard the song on the way over. The rest is history for devbus to recall later.

I'm calling a Thanksgiving break on this little "blog-o-rama" because I'm out of town and will be otherwise occupied. So, Happy Thanksgiving, everybody, and I'll catch y'all on the flip side. Maybe I'll have something to say. Maybe I won't. Who can tell?