Yes, I verified that number, it's accurate. Over three bloody years into this. And, for three bloody years, somehow Kayla and I have avoided to catching this thing. Even with the reintroduction of travel, trips to Disneyland, and going to restaurants all during both the delta and omicron waves, it seems we're impervious. Sure, we're still good about masking and we're both triple vaxxed, but you'd assume at some point it'd catch up with us.

You can go ahead and change all the verbs in the above paragraph to past-tense, because it did catch up... at least for me.

Last week, during the SurveyMonkey summer company shutdown, Kayla and I treated ourselves to a short cruise to get away from it all before we both returned to work (end of summer break for her). Now, we'd gone on a longer cruise as part of our honeymoon in December, a much longer cruise on a larger boat right as omicron was beginning its meteoric rise. And yet, we somehow escaped that one unscathed, despite the fact that I kept referring it to as the "COVID Cruise"; I was convinced we were going to come away infected. Perhaps its because our booster vax was still fresh in our veins, or perhaps its because mask enforcement was still a thing on cruises at the time, but we walked off that boat with clean bills of health. Whatever the reason, I actually hadn't given that much thought to the "COVID Cruise" joke this time around, despite raised infection rates due to the BA.4/5 variants of omicron currently floating around. But, given the timing of appearance of my symptoms, I most definitely caught it while we were there.

Oddly enough, Kayla is still as-of-yet unnaffected despite the fact that we were pretty much in the same places all the time.

Originally, I thought I had caught something else. I was doing daily self-tests coming off the boat, and those were all turning up negative. I'd spent Saturday helping Kayla pull her classroom together, which, after months of non-occupancy, had become quite stale and dusty. I'm allergic to dust and some of the symptoms lined up. Going into Sunday evening, however, I had that familiar feeling of being internally too warm. A quick IR blip of my forehead confirmed that my temperature as a bit north of where it should have been. Despite my negative test that morning, I decided I'd do one more test that evening.

A deep swab of the nostrils (I'm a masochist), a swish in the test juice, and four drips onto the test pad. Set timer for twenty minutes...

There it was. EXTERMELY faint such that I needed a flashlight to confirm for sure, but the second line was indeed there. I had Kayla confirm as well and then started going through the mental exercises of "oh god, what do we need to do?" Should I isolate? I should isolate. But Kayla's already been hanging around me and should've caught it from the same place I did. She was about to go back to school and be around the public at large, should she go ahead and call out sick? We decided that she would take another test and, if it was negative, I'd isolate and we'd both test again in the morning to determine if I had a false positive and if she was good to head to work.

She tested negative, and, after a slightly tearful "good bye", I resigned myself to the guest bedroom. Luckily, we'd just refurnished it in anticipation of my sister visiting, so I'd have a comfy bed and a TV. Quite cush, really. However, the fever continued to rise, hovering just under 102, and I never really got sleep. Morning came and we did our tests. Kayla once again was negative, I was very definitely positive. I guess my nose was now holding more viral load. 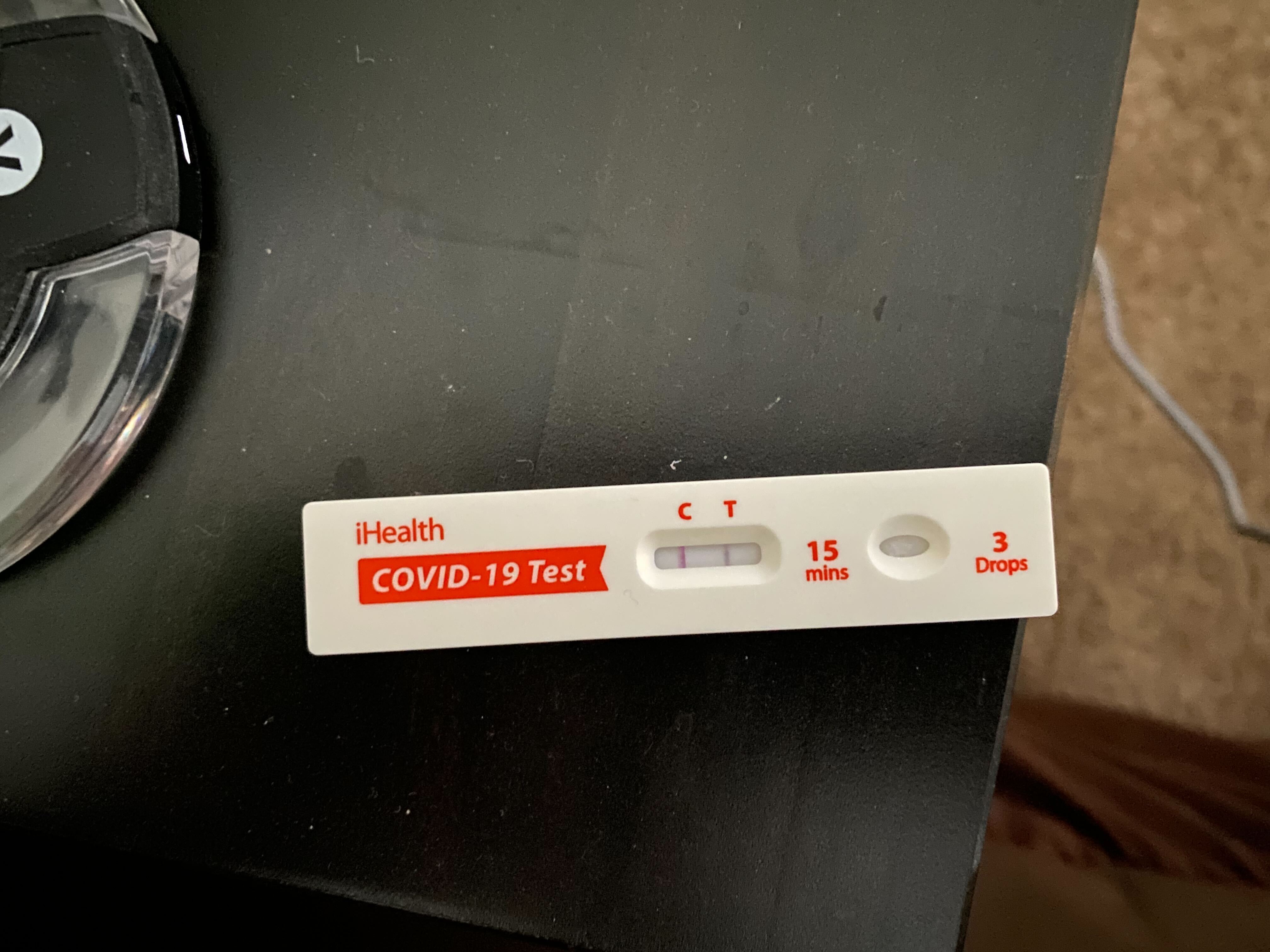 That's pretty much been my life for the last nearly twenty-four hours. I've watched untold amounts of long-form video essays on YouTube and still haven't really slept. My fever broke for just a bit this evening, but now seems to be coming back. The only real down-side (outside of not being able to be around my wife) is the fact that we did not plan meals with the anticipation that I would be at home this week. That's meant a lot of trail and chex mix for me throughout the day. It's definitely gotten old, but I didn't really feel like trying to be clever and cook something either.

So, this is my prison for the remainder of the week. Maybe I'll finish playing Ace Attorney Chronicles. Maybe I'll finish reading Dune. Too bad I won't be able to tell my intern "buh bye" in person, as it's his last week. Despite the fact that I tried to rest today, I'll probably be back WFH'ing tomorrow.

Hopefully I can get some sleep first..